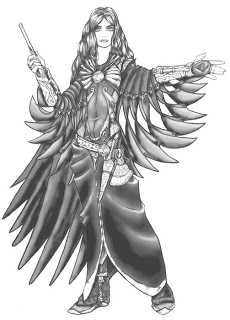 Much to the consternation of some of my more seasoned D&D players, Heroes Against Darkness doesn’t have some of the staples of magic that feature in D&D.  When looking for solutions to some problems their characters faced, they’d ask about spells that they’d used in D&D to solve similar situations.

I made a conscious decision in the design of Heroes Against Darkness that the spells would not afford players the sorts of broken tricks and combos that have become a tiresome cliche in D&D.

Here are a few of the main offenders:

The most overused combo is Scry-Buff-Teleport, where characters scry their target (such as with a spell or a crystal ball), and then, having established the target’s location, they buff their characters and finally Teleport to the target’s location and unload the rest of their spells and attacks while buffed.  Furthermore, the existence of spells like Discern Location, Locate Object, Locate Creature, Scrying, Clairvoyance, Clairaudience means that the simple task of presenting players with a normal locate, rescue, acquisition, recovery, thieving or vengeance quest becomes an exercise in contingencies and failsafes.  As a DM, I’ve got better things to do than spill thousands of pints of gorgon’s blood to prevent this kind of shenanigans!

Teleport (and Teleport Without Fail) is so abused that various editions and expansions have added more spells to counter it:

Never have so many spells been created to mitigate the effects of one bad spell.

To me, spells and combos like this are the equivalent of introducing a weapon at higher levels that totally bypasses all armor.  Once something like this has been introduced, the only option is to add a bunch of magic or magical armor that negates the ability of the weapon, returning the status-quo.  Obviously this is a totally pointless exercise, and one that breaks the game either temporarily or permanently.

D&D‘s Teleport could be easily ‘fixed’, perhaps by only allowing teleport into a properly prepared area, rather than just any area.  In Heroes Against Darkness, I’d balance a similar teleport spell by increasing the anima cost (so that you can teleport, but you’ll be low on anima once you’ve reached your destination), increasing the casting duration, adding a temporary Wisdom cost, or maybe applying a condition (e.g. stunned or dazed) to all teleportees for a while after they arrive.

At the end of the day, the idea of narrative control isn’t an attempt to railroad the players.  It’s more of a case of ensuring that players use more than just one method for solving all problems that I present them with.  If their default solution for almost any problem is to cast Locate Object (or some variation), and then GM has to plan for this and make some plan against it or some reason for it to not work, then there’s something wrong.