Hero Kids is the ENnie award-winning fantasy RPG for kids aged from 4 to 10. This game offers a fast and fun introduction to RPGs, perfect for younger kids who are just getting interested in role-playing games.

Hero Kids, adventures, and expansions are available now at DriveThruRPG:

And you can follow the development and news about Hero Kids at the dedicated blog:

Hero Kids has a simple combat and adventuring system which avoids the complex maths of full-blown systems. Hero Kids' opposed dice pool system also keeps the players involved in the game even when it's not their turn.

The combat and adventuring mechanics in Hero Kids are based on six-sided dice, so you don't need to find any unusual dice to play!

The core game comes in a 50-page PDF and includes all of the rules and play instructions, as well as 10 heroes for the kids to play, plus a set of 16 basic monsters (and all of the separate adventures come with additional monsters). The game includes male and female heroes, including Warriors, Hunters, and Warlocks as well as unique heroes like the Rogue, Brute, Healer, and Knight. All of the heroes and monsters also come with printable stand-up minis to use in combat encounters.

Additionally, this basic game pack also includes the 19-page introductory adventure 'Basement O Rats', which comes with an extra monster and five illustrated printable encounter maps. Can the kids rescue their friend Roger from the unusually large rats that have overrun the tavern basement?

Hero Kids has undergone and extensive development and playtesting to ensure the game is as simple, addictive, and engaging as possible. But don't believe me, listen to the actual players:

"The game was great, we were off and playing within a few minutes of reading the rules!"

"Was woken up at 6am this morning by my son, saying he wanted to play Hero Kids right now! There's no such thing as going back to sleep in a 7yo's universe!"

"The game was simple enough for my precocious three-year-old to enjoy, and my five year old to not be distracted from. With the included adventure we all had a lot of fun, including me."

"The art in the book is great: the character portraits are great and very evocative, bringing forth things kids interested in this will probably be familiar with anyway. There's a character who resembles Rapunzel from Disney's Tangled, another who reminds me of Prince Zuko from Avatar: The Last Airbender."

"The game mechanics are easy to understand and fast enough to keep young players interested and do not get in the way of the story that is unfolding."

"The only real complaint I have is that there aren't full-page coloring pages available for each of the character portraits, something my kids (and myself!) would really enjoy."

"The design is clever, well thought out, and guaranteed to make you jealous that you didn't come up with it first."

"Providing stand-ups for each character helped a lot as well - it saved me from having to dig through my existing figures to find ones that resembled the children, and it reused the wonderful art."

"A great 'starter' rpg for kids, and even better gaming experience for parents to play with their kids. The core rpg experience has been boiled down to its bare essentials here. It only takes about 15-20 minutes to read the entire rulebook and have a good enough grasp on the rules to play your first session. Games will typically take under 30 minutes to play, which short for a typical rpg session, but absolutely perfect when playing with kids." 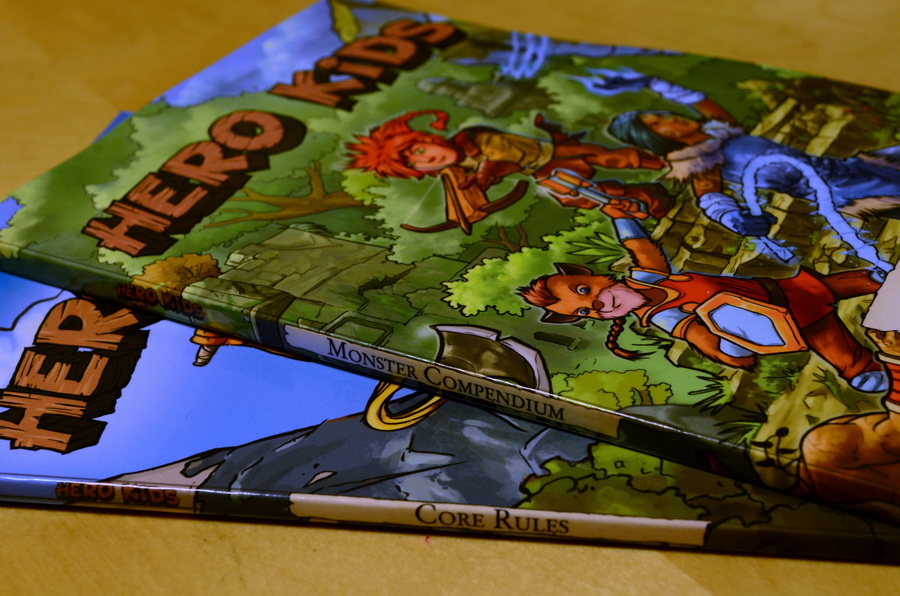