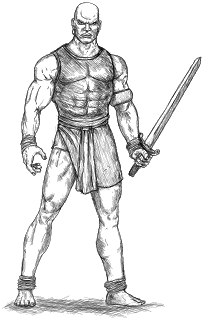 The first post in this series gave an overview of the core elements of D&D, while part II looked at
progression and balancing modular elements.

When designing features for role-playing games or videogames, one of the major considerations is the magnitude (Pop! Pop!) of the additional work that the proposed feature places on the entire project, compared to the overall value of the feature.

Using a videogame example, heavily scripted AI behaviors might be fine in a constrained test-bed, but when you subsequently roll these out across an entire game the amount of work becomes unmanageable (especially when compared to an alternative solution, such as a more sophisticated AI algorithm).

I mention this first because it relates to the assumed goal of D&D 5th edition that it will support different styles of combat and will work with content from earlier editions, and because this post is about combat.

Although the basics of combat in D&D have remained (largely) unchanged, the details have changed greatly from edition to edition:

Now, it’s easy enough for a game to replicate these different styles and magnitudes of combat for each character, the difficulty when pursuing this course is in the creation of content (modules/adventures) where you need to cater for characters who have the equivalent power of a Basic character compared to others that have the front-loaded power of a 4th Edition character.

If you separate Basic and Expert rules from this progression, then there’s a pretty good correlation across the editions. This means that it should be possible for Basic 5th Edition characters (that only simple melee or ranged attacks) to fight similarly to Advanced 5th Edition characters that have powers-style attacks (like those of 4th Edition).

However, this becomes slightly more complicated when you factor in the HP for Level 1 characters or 1 HD monsters.

Once the character and monster starting HP are compared to the average weapon damage at 1st level, it’s clear that mixing and matching all of the characters and monsters from various editions isn’t going to just work. A 4th Edition monster is going to cream an AD&D style character, and and all AD&D monsters are going to go down like minions to an equivalent level 4th Ed character.

As I mentioned at the start, any decision taken about how to deal with the disparate HP amounts of each of the editions needs to be made with consideration for the amount of work it’s going to add to every module and supplement that the game comes out with.

Considering the scenario where Basic and Advanced characters have different starting HP, you would then need all encounters to be presented with two sets of stats, one set with monsters with low HP for a party of Basic characters and then an alternate set of monsters with high HP for when the party is made up of Advanced characters. This is not desirable, because it adds to the amount of work that needs to go into each piece of content that is created.

In an alternative scenario, all characters have high starting HP, and conversion sheets are created for monsters in earlier editions so that any monster could be converted to 5th Edition’s unified rules. The conversion of a monster from earlier editions to ‘5th Edition’ might be as easy as simply adding 15-20HP to any monster of 1HD or more (½ HD monsters could remain as the equivalent of minions).